2016 has been quite a coontastic year. i’m talking vintage.  So much so that we had to trade in the coon train  for a vessel much larger to accommodate all of them.  Cooning has become an epidemic in America and it is important that we in the non-cooning negro community collectively rebuke such behavior whenever it occurs. As with anything else there are levels to coonery. These first set of 50 coons are what we call somewhat redeemable coons. Particularly the first 20-30. The closer to the number one spot they get the less redeemable they get.
So with out further ado here are your top 100 coons for 2016 (the first 50)
Coontestants# 100-91: Mainstream black media members Donna Brazille, Al Sharpton, Karen Finney, Toure, Jonathan Capehart, Eugene Robinson, Harold Ford,  Joy Reid, Don Lemon and Juan Williams 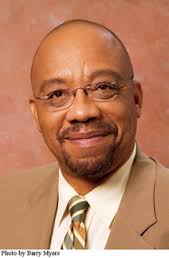 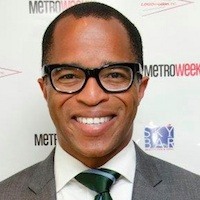 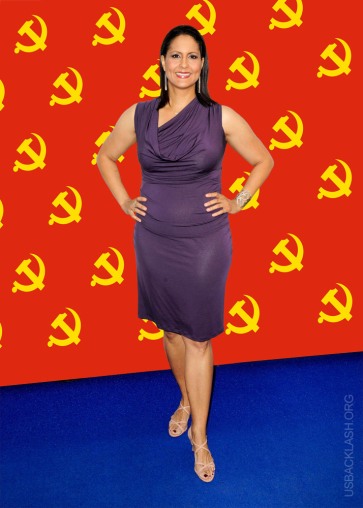 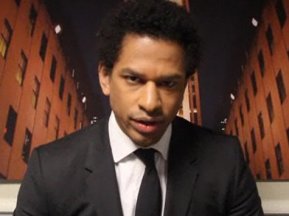 The black members of the mainstream media serve a very purposeful role and that is to correct the myriad false narratives bantered about in the ether and more importantly to  better inform black people so that as a community we’d be able to make the best decisions possible–particularly at the ballot box. All of these members of the mainstream press checked their journalistic integrity and intellectual honesty at the door and for the most part became defacto campaign surrogates for Hillary Clinton. They did not challenge any of the false narratives, half truths or out right myths surrounding her coronation  to the Democratic nomination  which in turn fed her false sense of invincibility in the general election. These ten members of the mainstream media as much as anyone else in media are responsible for the incoming idiot in chief. In 2017 lets not rely on these characters to bring us the news we need. In the very least look at each of them with a more cautious eye while holding them to higher standards as I believe they all could do better.
Coontestants#92-83:  The  Seahawks response to Colin Kapernicks national anthem protest
Coontestant #82: Fantasia
Coontestant#81 Mary J Blige
Coontestant#80: Laila Ali

Coontestants#79-73 “The Mothers of the Movement”

“Obviously he has the right to stand up for what he believes, but he has to understand there are consequences and might be backlash for what he said. You know a lot of people are criticizing him — I think his heart is in the right place, I just think he was going about it in the wrong way, If he really wants to make change, sitting his butt down [during the anthem], that’s not going to change, that’s going to get people very upset and he has to understand that. If you think sitting during the national anthem, a lot of people really served before his time, now, trying to give him the freedoms and the liberties that he has … and I tell you this, I’m a black man. And Colin Kaepernick — he’s not black. He can not understand what I face and what other young black men and black people face, or people of color face, on a every single [day] basis. When you walk in a grocery store, and you might have $2,000 or $3,000 in your pocket and you go up in to a Foot Locker and they’re looking at you like you about to steal something. I don’t think he faces those types of things.” ~ Rodney Harrison 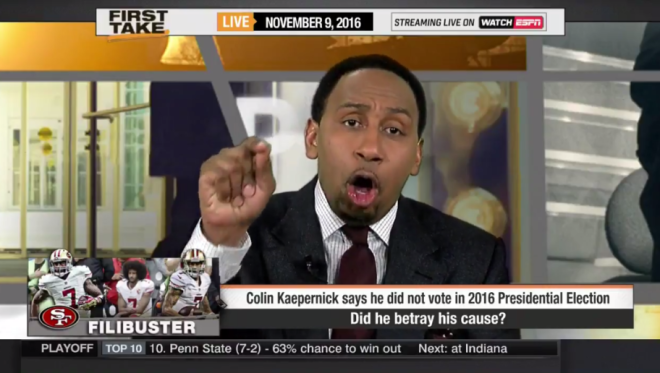 Stephen A Smith who cracked the top ten in years past was not even supposed to make the list this year because for the most part in 2016 he practiced reasonably responsible journalism. That was until he lost his mind over the fact that Colin Kapernick did not vote. Here’s a dude (Colin Kapernick) that donated over 1 million dollars in 2016 to causes that help uplift the poor black and brown and this coon is brow beating him because he did not vote for either of the two candidates that have more than proven to not have the best interest of the community in heart mind and agenda.
in his own words: 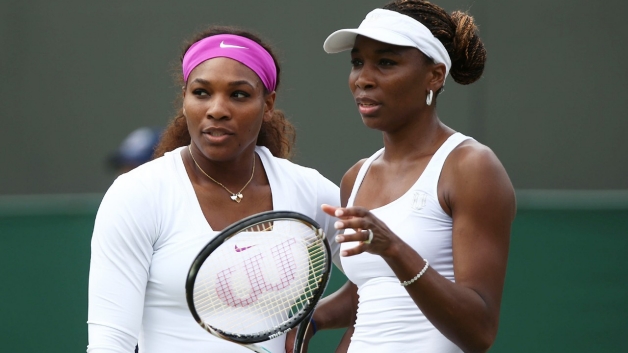 After her sister Serena took to Facebok and penned a heartfelt missive about her concerns about the ongoing injustices  dealt to black people at the hands of police and municipal governments Venus was asked her thoughts. And lets just say her opine was not Black Twitter approved.. 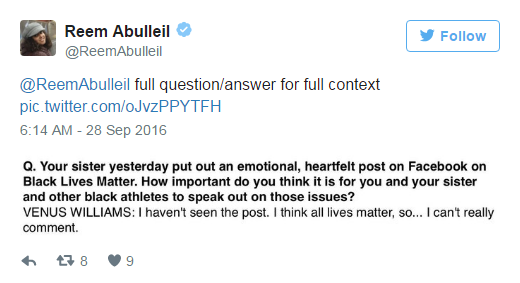 These three “distinguished gentlemen” underscore the fecklessness and ineffectual direction that the Congressional Black Caucus has long been going in. Once billed as the conscience of the congress the CBC just like these three bozos are bought and paid entities of America’s corporate overlords. No longer are they in congress to serve the people. They are there to enrich themselves and hold on to their seats. It’s high time they all be replaced by some new blood.

On the heels of all the protests surrounding the murders of Alton Sterling and  Philando Castile, this is what Kevin Gates had to say:

“We kill each other. I’m talking about we lay up under each other’s cars, lay behind each other’s houses then whip by, boom boom, kill everybody in the car…but as soon as a white boy kills one of us, everybody go to hoopin’ and hollerin’ and all that old stupid-ass shit …That’s bullshit. When you stand for something, you’ve got t[o] stand for it all the way, not half way.” ~ Kevin Gates

Back in July he got into a fender bender with a black woman and after the sister questioned why he was recording her he says this:

The video went viral as he intended but the blow back for his cooning for clicks shenanigans was too much for him to handle hence he used his platform for the first time to speak highly of black women where he pulled the “I never had a father” card. Of course we all know that the apology was bullshit but that is a testament to how much of a bully pulpit the Twitter verse can be when properly leveraged. Another win for Black Twitter but I will say this. It really is time to start giving eye jammies to these brothers out here that think it prudent to be so overtly disrespectful to black women as he and a number of the coons that made this list have been.

“If I’m a cop and every time I see a young black youth, whether I watch them on TV, movies, or just see them hanging out, and they’re not looking properly dressed, properly refined, you know, carrying himself, conducting himself proper hours of the day — things that a man does, you’re going to have a certain fear and stereotype of them…I tell my sons, I say, ‘if you’re going somewhere, you don’t have to wear a hoodie — we live in New York, so a hoodie and all that is all good. But sometimes, you know, button up your shirt. Clean up. Look like a young man. You’re not a little kid.” ~Rza

What makes his statement so eggregious is the fact that as one of the founding members of the Wu Tang Clan and the so-called genius of the group he made his living off of urban wears and urban vernacuilar. Now that he’s hanging out with Russell Crow and the Hollywood Click he wants to go all rescpctable Negroe on us.
Coontestant#50 Wendy Williams

“His speech was very poignant, on one hand. On the other hand, you know, I would be really offended if there was a school that was known as a historically White college. We have historically Black colleges. What if it was the National Organization for White People only? There’s the NAACP.”~ Wendy Williams

After a noticeably silent gasp of her normally gregarious audience she goes:

“Look everybody’s quiet. You’re leaving me out here to dry by myself?”

Now a normal dummy, even with coon tendencies would take that silent queue as a hint that they should probably quit while they are ahead and switch up the conversation. But not Wendy Williams. She’s a special kind of stupid. She goes on to say:

“National speeches like this always rub people the wrong way. Just like White people will be offended because Spelman College is a historically Black college for women. You might feel funny about that. I know I’d feel funny like I just told you. If there was a White college or whatever.”

Twitter eat her ass up so bad that that Chevrolet who previously helped underwrite her show dropped her.